‘The Great Railway Conspiracy: Fall and Rise of Britain’s Railways Since the 1950’s’ by David Henshaw

The book covers the Beeching era, and now comes right up to date, with a list of the top 30 reopening candidates, and Wisbech-March at number 27.
“This volume throws new light on the manner in which Britain’s railways were “stitched up” by powerful political interests in the roads lobby during the 1960s and 1970s. Although commentators had referred before to the manner in which road transport was able to exert political pressure to gain supremacy, David Henshaw uncovered important new evidence giving a clearer picture of the true extent of the web of intrigue and deception which was spun. Crucially, however, the author found that some of the documents which might have proved particularly interesting had disappeared from public records”
Copies are available at 35% off the retail price of £14.99 from atob@atob.org.uk 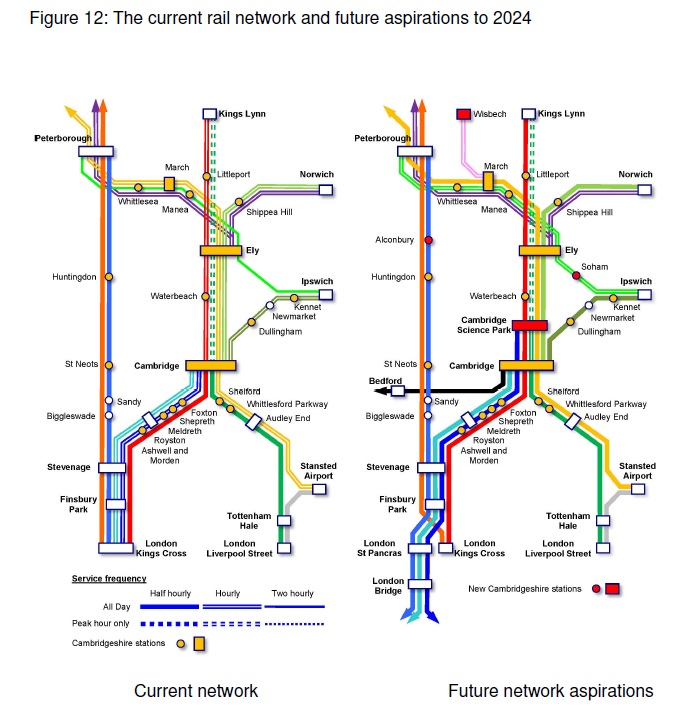 “The Action Plan sets out the priority strategic infrastructure required to support the continued economic prosperity of Cambridgeshire and Peterborough to 2050.”
“High Quality Passenger Transport Option: Reinstate March to Wisbech railway line and operate shuttle service (light or heavy rail) between the towns.”

“The March Market Town Transport Strategy 2013” by Cambridgeshire County Council
http://www.cambridgeshire.gov.uk/transport/strategies/transport-plans/market_town/march.htm
“Improvements in the frequency of rail services which stop at March – earlier in the morning, throughout the day and later into the evening – will be sought by the Local Authorities working together with the relevant rail operators and Department for Transport to negotiate additional services for March.”

“Wisbech 2020 vision” by Fenland District Council  Stephen Barclay MP and Cambridgeshire County Council
http://www.wisbech2020vision.co.uk/CHttpHandler.ashx?id=7705&p=0
“Many actions have been started, delivered or accelerated even before the formal launch of the Vision. An expert study on the viability of Wisbech rail connectivity has been commissioned – recognising the importance that the transport network has for the future of the town.”
“Wisbech 2020 is a bold vision, but one that requires collaboration amongst partners and stakeholders, and lobbying to central government and external funders.  Funding will be a major challenge and it is only by working together that we can build a sustainable economic future for the town”

Cambridgeshire Local Transport Plan 2011 – 2026 (PDF download)
http://www.cambridgeshire.gov.uk/NR/rdonlyres/81A57E02-48D8-4C24-862F-B42A900F70D8/0/LTP3PoliciesandStrategy.pdf
Page 4-33 and 4-95  “…the Transport and Access Group are keen to see the line between Wisbech and March re-opened. The Council supports further work by the Association of Train Operating Companies Connecting Communities Report and Fenland District Council to assess the costs, benefits and feasibility of the scheme.”

Association of Train Operating Companies “Connecting Communities – Expanding Access to the Rail Network” (PDF download)
http://www.atoc.org/clientfiles/File/publicationsdocuments/ConnectingCommunitiesReport_S10.pdf
“Stations: Wisbech Town; possible additional park and ride station adjacent to A47.
Catchment area: a station at Wisbech would also serve a wider catchment area of villages and towns such as Long Sutton, to the north.”

Steve Barclay MP for North East Cambridgeshire
http://stevebarclay.net/?p=165/
“One of the biggest problems faced by those of us who live in North East Cambridgeshire is transport links. Rail services are key to a rural area like ours and a priority which I am working on closely with Ministers, Train Operating Companies and other key stakeholders is how we deliver a better rail service. There are four key targets:
….
4. Securing a feasibility study for getting trains back to Wisbech in the longer term, as Wisbech used to have two train stations and now has none”